This is a review of Andy Williams Greatest Hits as a solo artist. He is known for his own TV show “The Andy Williams Show” a variety show, from 1962 to 1971, and other numerous television specials. This is his story of his solo singing career. He has recorded seventeen Gold and three Platinum-certified albums. 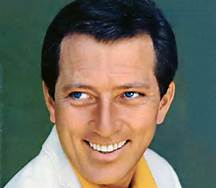 He was born Howard Andrew “Andy” Williams on December 3, 1927 in Wall Lake, Iowa and died on September 25, 2012 at the age of 84. He was the son of Jay Emerson and Florence (Nee Finley) Williams. He had three older brothers named Bob, Don and Dick. He attended Western Hills High School in Cincinnati and finished high school at University High School in West Los Angeles when his family moved to California.

Andy’s first performance was in a children’s choir at the local Presbyterian church. He and his brothers formed “The Williams Brothers Quartet” in late 1938. They performed on the radio in the Midwest, first at WHO in Des Moines, Iowa, then at WLS in Chicago, and WLW in Cincinnati. They all appeared in four musical films: “Janie” in 1944, “Kansas City Kitty” in 1944, “Something in the Wind” in 1947, and “Ladies’ Man” in 1947.

The Williams Brothers were signed by MGM to appear in “Anchors Aweigh” and “Ziegfield Follies” in 1945, but before they went before the cameras, the oldest brother Bob was drafted into military service and the group’s contract was canceled. Kay Thompson, a former radio star who was now head of the vocal department at MGM, had a nose for talent and she hired the remaining three Williams Brothers to sing in her large choir on many soundtracks for such MGM films as “The Harvey Girls” in 1946. When Bob was done with his military service, Kay hired all four of them to sing on the soundtrack to “Good News” in 1947.

By then, Kay Thompson was tired of working behind the scenes at MGM so, with the four Williams boys as her backup singers and dancers, she formed a nightclub act called Kay Thompson and the Williams Brothers. They made their debut in Las Vegas in 1947 and became an overnight sensation. Within a year, they were the highest paid nightclub act in the world, breaking records wherever they appeared.

The act broke up in 1949 but reunited for another hugely successful tour from the fall of 1951 through the summer of 1953. After that the four brothers went their separate ways. A complete itinerary of both tours is listed on the Kay Thompson biography website. Kay Thompson helped Andy emerge as a solo artist and wrote many of his songs.

His solo career began in 1953 when he recorded six singles for the RCA Label. None of these recordings made the charts and Andy was dropped from RCA. In 1954, Andy signed a contract with Cadence Records. Andy’s first charted single under the Cadence Label was “Walk Hand In Hand” #54 in 1956 and stayed on the charts for eleven weeks. His next single was his first top ten hit “Canadian Sunset” #7 in August, 1956. In 1957, Andy released his one only #1 hit “Butterfly” and stayed on top for three weeks.

In 1958, Andy continued his success with two more top ten hits “Are you Sincere” reaching #3, and “Lonely Street” at #5. In 1959, he followed with one more top ten hit “The Village Of St. Bernadette” #7. He also recorded the #11 hit single “Hawaiian Wedding Song” in 1958, one of his biggest requested songs.

Andy stopped having top 40 hits and the Cadence Records dropped him from their contract. Andy then signed with Columbia Records. His first top ten hit under the Columbia Label was “Can’t Get Used To Losing You” #2 in 1963. 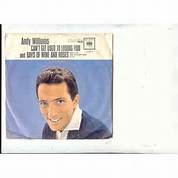 This is a complete listing of Andy Williams top ten and number one songs from the Hot 100 and Adult Contemporary charts. The list will comprise the title, date of debut or at #1 the peak date, peak position #, and the number of weeks at #1, #2, & #3 in () Hot 100 only. The songs will be listed on chronological order with the number one song titles in bold.

It’s The Most Wonderful Time Of The Year – Original Recording

If you are a big fan of Andy Williams’s the albums below contain his only #1 song and his top hits and the Christmas album contains his best Christmas song.

You can shop for individual Andy Williams Hits

by clicking on the link. You will be taken to Amazon Try Prime Digital Music where you can download any of Andy’s individual song titles you may be missing from your collection.